The Mathematical Origin Of The Love Heart Symbol

Discussion concerning the first major re-evaluation of Dewey B. Larson's Reciprocal System of theory, updated to include counterspace (Etheric spaces), projective geometry, and the non-local aspects of time/space.
Post Reply
5 posts • Page 1 of 1

The Mathematical Origin Of The Love Heart Symbol

I received the latest update from Jain 108 this morning:


The Mathematical Origin Of The Love Heart Symbol

Did You Know that the Phi Spiral is the Mathematical Origin of the Love Symbol, that the whole world uses, but it is done in a special way.

We start off by creating the familiar Phi Spiral in the diminishing squares of the Phi/Golden Rectangle, and double it or mirror-image it. These 2 Golden Spirals, each have an Eye or Centre of the Tornado, called the Sweet Spot, but what if we could merge these eye centres, as if we slid one spiral across and over the other such that they had One Eye, One Centre, what would it like?

In the fractal animation by Dan Winter, called Heart Zoom, as we zoom into the One Eye, we keep seeing an upright Heart then zooming in we see an inverted Heart, then upright, then inverted, forever, creating an oscillation that goes to Infinity, into other worlds.

This is the true cochleoid emblem and origin of humanity's symbol for the Heart, for Love, it represents the reconciliation of opposites, the fusion of dualities the Two that is made One.

double it or mirror-image it

One Eye, One Centre

upright Heart... inverted Heart... then upright, then inverted... forever, creating an oscillation that goes to Infinity, into other worlds.

the Heart... represents the reconciliation of opposites, the fusion of dualities the Two that is made One.


The video linked above shows this oscillation in motion and it is indeed mesmerising!
Top

The Love Knot, Knot of Hercules, Infinity Knot, or Figure of Eight Knot is described as a continuous knot having the form of a figure-eight which originated as a healing charm in ancient Egypt. It well known for it's use in ancient Greece and Rome as a protective amulet or as a wedding symbol.

It well known for it’s use in ancient Greece and Rome as a protective amulet or as a wedding symbol. Other sources identify the Love Knot to be an adaptation of one of the eight Buddhist symbols having origin in Tibet. Various interlocking Celtic knots also bear a striking resemblance to the Love Knot. The crossing strands in a love knot are viewed in Celtic lore to depict the spiritual meaning of life. The symbolism of the knot has survived well beyond its ancient origins, and was a very common symbol in medieval and Renaissance love tokens. 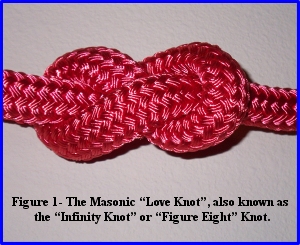 Regarding the Love Knot or Chain of Union:

This emblem is, indeed, the "celestial frame" which limits, separates, and protects the "World of Light" from the "World of Darkness"; the sacred from the profane.

The above, relating to Jain 108's 2 phi love hearts, is just the tip of the iceberg when it comes to Ancient Egyptian, Celtic and Masonic knowledge linked to unity and 1 = Φπ²/16.

Please see the other articles at http://www.freemasons-freemasonry.com/f ... metry.html for the Tetractys and more.

I will add some more interesting connections regarding Euclid's 47th Proposition at a later date.
Top

One article of many...

Euclid, the Point within a Circle, the Vesica Pisces and Divine Proportion:
http://www.freemasons-freemasonry.com/d ... rtion.html

I have not read over most of this yet but want to note it here with plans to continue in my analysis.
Infinite Rider on the Big Dogma
Top

Sorry if this is explained somewhere else, but by what system of calculation or with what calculator are you using where 1 = Φπ²/16. I'm getting 0.99808471103
Play Cosmic Games, Win Cosmic Prizes.
Top

You cannot use the π symbol on any calculator as they are all incorrect. Nor can you use any computer function that returns "π".

The true value for π is provided for in the thread here.