'Trace an anneagram with the nine on top, then trace the shapes of motion, these are the shapes obtained by multiplication (yes, not additive, multiplicative just as in RS) and for example 2*7 = 14 and 1+4=5. Once the shapes are traced find the contradiction and resolve it (doing this in yourself is also part of the work). Notice how the shapes of motion are a close match to Larson's basics motions, and how the material (physical) and cosmic (etheric) sector are evident, having 9 as the symmetry center. One can also see the ethical sector (astral plane of consciousness) in 3-6-9, the prime mover. Notice the x9 shape, the all seeing eye on top of the pyramid.'

user737 wrote: ↑
Wed Feb 19, 2020 8:25 pm
'Trace an anneagram with the nine on top, then trace the shapes of motion, these are the shapes obtained by multiplication (yes, not additive, multiplicative just as in RS) and for example 2*7 = 14 and 1+4=5. Once the shapes are traced find the contradiction and resolve it (doing this in yourself is also part of the work). Notice how the shapes of motion are a close match to Larson's basics motions, and how the material (physical) and cosmic (etheric) sector are evident, having 9 as the symmetry center. One can also see the ethical sector (astral plane of consciousness) in 3-6-9, the prime mover. Notice the x9 shape, the all seeing eye on top of the pyramid.'

I am sure it relates to what I am after in some way but it is not immediately obvious to me, so please forgive my shortsightedness: what should I be looking at?

I wonder if it has anything to do with what follows concerning π.

I have been trying to figure out exactly what the relationship is between π and Φ,
only to realize the former can be derived by the latter: 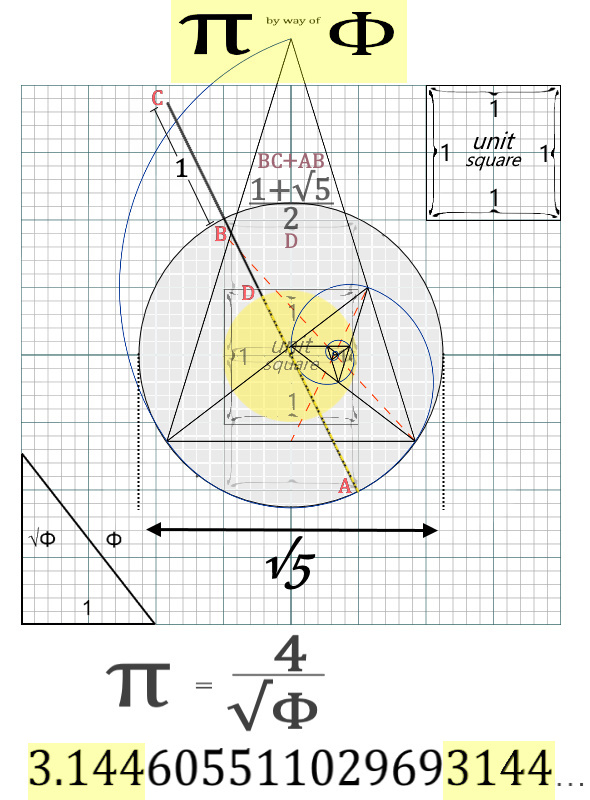 Beginning with a circle whose diameter is √5,
place two unit squares inside of the circle side-by-side
(either horizontally or vertically, the latter is shown above)
and find √5 as any diagonal between two opposite corners (AB as shown)
(this diagonal thus being equal to the diameter of the circle).
Add 1 unit distance to this diagonal (√5 + 1) and find the mid-point (/2).
Note: this midpoint coincides with the circle whose diameter is 2r = 1
by way of rotating the √5 diagonal about the origin of the circle we began with,
and thus "kisses" the square four times equidistantly, thus a more precise π
can be begotten directly from Φ expressed as a ratio of Φ.
This ratio is 4/√Φ = π and/or 16/Φ = π².

For reference, here is the triangle used to construct the Giza pyramid: 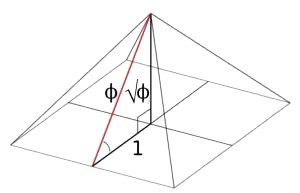 And an overlay of the geometry of 4/√Φ as it concerns the circle/square of 2r/1: 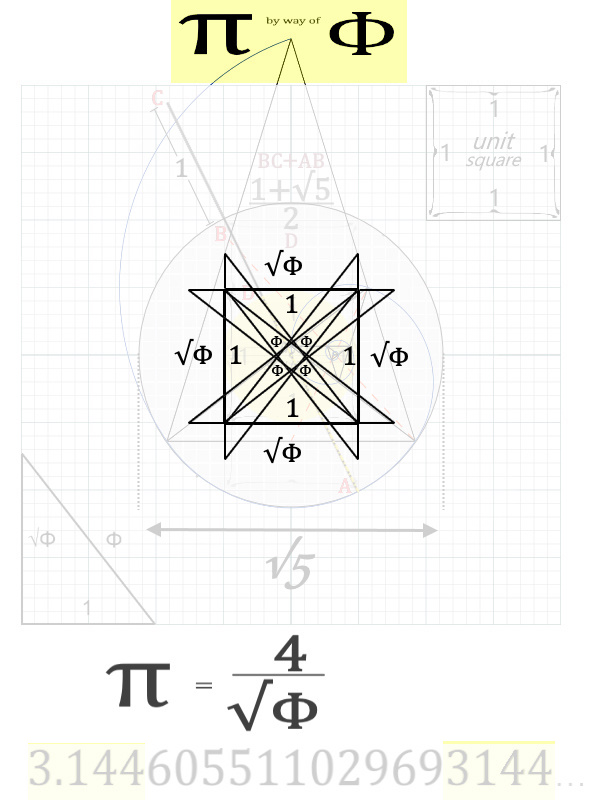 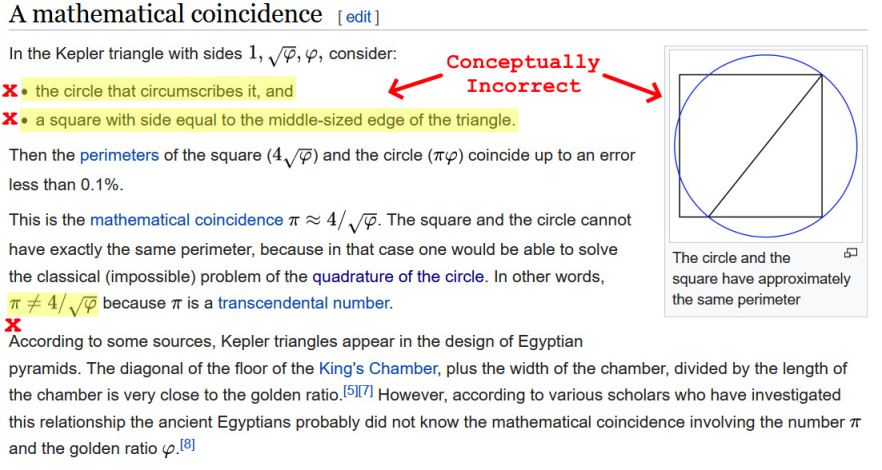 I am unsure as to the motive for the above, but the construction of the geometry
is conceptually unsound: concerning the same Kepler triangle, a circle that circumscribes it
completely ignores the imperative need for the diameter of the circle to be √5, the same to which
the Kepler triangle must apply. If the circle is not √5, there is no valid coupling and π remains 'transcendental'
however if coupled to the √5 diameter circle (as shown), the coupled relation permits a geometry
whose co-operation between Φ and π are respectively reflected in the following:

graphed with an overlay of the same geometry: 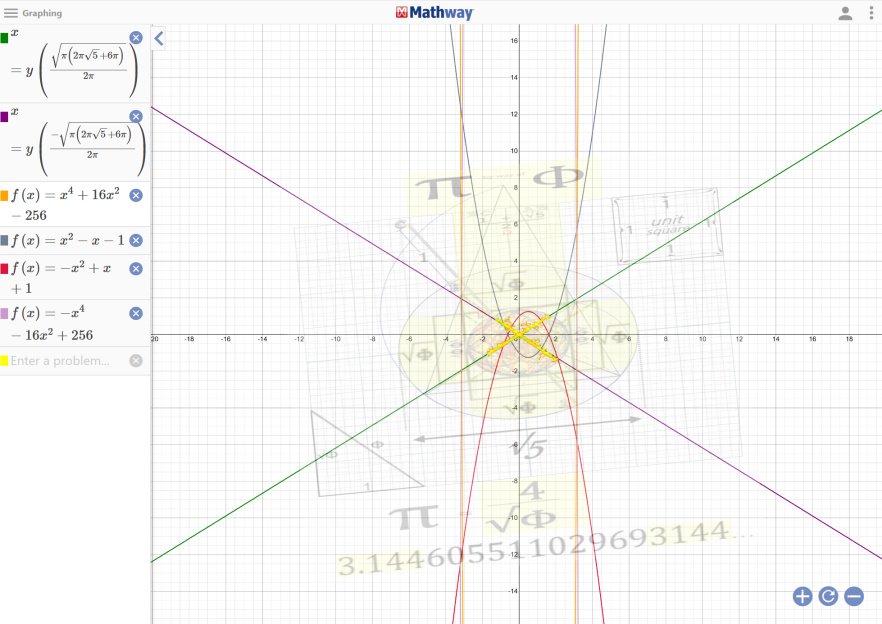 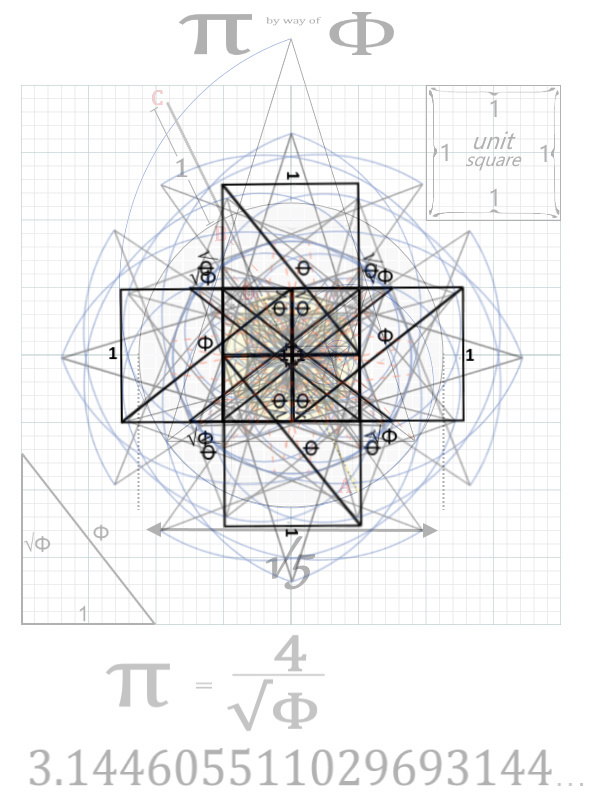 Images such as the following can easily be constructed with a single golden spiral model
and one 'bulge' function (paint.net) to magnify what is directly in the center (otherwise hidden). 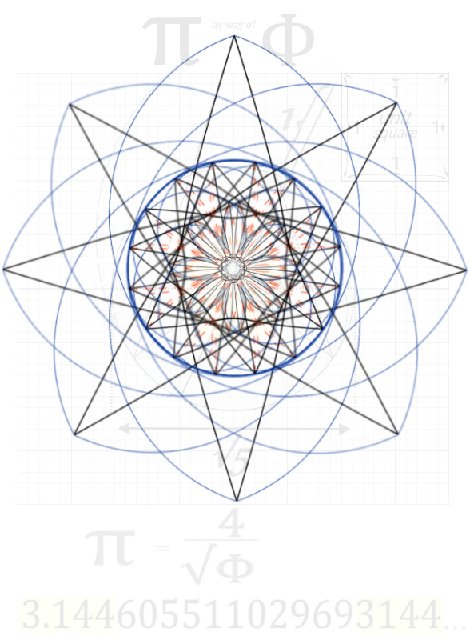 I have a general inclining towards the notion that the natural geometry of the universe
can be captured as some particular relationship between only π (as 4/√Φ) and Φ, recalling:

ckiit wrote: ↑
Wed Jan 29, 2020 3:55 am
What are the odds of a single polynomial whose +/- root solutions are +1 and +phi^3, thus scale invariant?
Would that not be an equation which describes the physical universe?

but only if the relationship between the two is known
(ie. π is not autonomous, it is naturally coupled to Φ).

Finding the exactitude of π can never be done with polygons (as approximated by Archimedes)
thus by using the natural curve of the Φ spiral the circumference of the circle can be known. 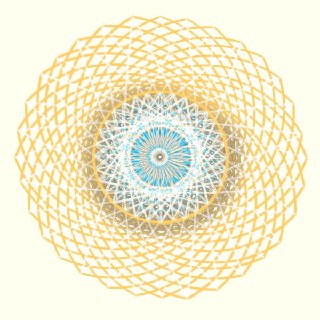 as seen on the recently engineered Ferocell devices: 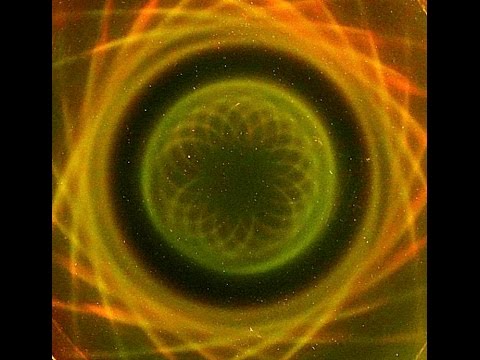 EDIT2 if one takes the Fibonacci sequence 1, 1, 2, 3, 5, 8, 13, 21 etc. and continues indefinitely,
one may notice two important points:
i. the last digit of every 60 numbers completes a recurring pattern, wherein
ii. every 5th number of this pattern is divisible by 5

The first is important because it establishes the precedent needed to derive a circle (or folded, as in infinity ∞), and
the second is important because it reveals the "fold" in/of the same circle induced by the √5 operation of Φ. Thus,
the golden ratio (Φ) and the circle (π) are scale-independent linear/circular counter-parts to one another at 60 "cycles".
Top

Connecting the above to:

...This morning, Gopi sent me an email suggesting that, due to the photon being a quaternion of 4π radians...

...So what we have is two types of progression: linearly outward (yang) and angularly inward (yin). Both run at "unit" speed, 1s/1t linearly, or 2π/1t angularly.

But this raises an interesting question... is the speed of light the same for every color?

Linear and angular are (above shown) complimentary functions of Φ and π respectively:
the π by way of Φ effectively finds/shows the coupling of π itself as an emergent of Φ, therefor:

What image (line, as Φ) is to 'el' (as in 1d electricity),
likeness (curve, as π) is to 'im' in/of elohim (as in 2d magnetism) -
the same properties as the creator of the skies and the terrains according to:

Recalling the account, elohim (plural) share in both image (male) and likeness (female) characteristics.
These two natures are subsequently reflected in the mythical Adam and Eve who share in a mythical Garden of Eden.
This conjunct plurality is made explicitly clear by elohim if/when elohim is the speaker: 'us' and 'our' are used.
However, if/when elohim is being referred to by an outside source, elohim acts as a as singular entity.

The reason I take this approach is because RS2 is sitting on the edge of a big opportunity:
to inductively establish the need for "honoring" the so-called "mother and father" of all motion:
Φ and π because these can be shown to be whence and to which all motion is duly bound.

It is clear to me that Φ and π capture these two co-dependent natures and thus anticipate
harmonization can not possibly come about until the two are reconciled. I do hope RS2
brings these two together soon because humanity is going to need a new 'theory of everything'
before/after the West falls to the 'believers' who 'believe' in gross dis-proportionalism. 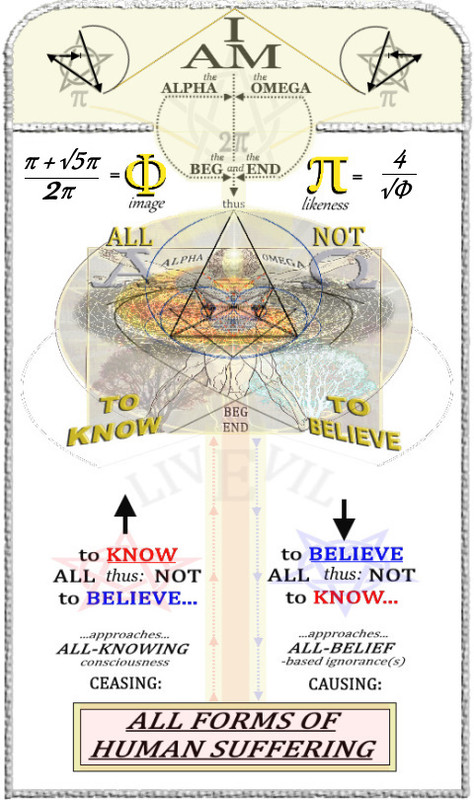 The first victim of any "us vs. them" belief-based ideology is the believer in/of it.
In almost all cases believers are indoctrinated (ie. abused) from a very early age
and have no alternative "lens" through which to see creation - only their ideology,
both religious and secular alike.

The sources of suffering are real, but the knowledge as to their true source is lacking.
I hope RS2 can use the essence of this orientation system to produce for humanity
a unified "field" theory which resolutely indefinitely approaches the cessation of any/all
forms of human suffering by clarifying the only two possible "orientations" to/from unity
as it may (or may not) apply to any possible all-knower, thus theist/atheist-invariant,
insofar as any true theory of anything must be able to explain 'from whence human suffering?'.

In any conceivable "believer vs. unbeliever" situation, it takes a "believer" to "believe":
i. "belief" is in-and-of-itself a virtue (rather than a potential vice),
ii. evil is good (without the need/inclining to define them as per the admonishment of Genesis 2:17)
iii. satan (so-called) is god (so-called)
thus all persecution of all "unbelievers" is heinous
and has not a valid root: religious and/or otherwise.
Top
Post Reply
23 posts