Discussion concerning the first major re-evaluation of Dewey B. Larson's Reciprocal System of theory, updated to include counterspace (Etheric spaces), projective geometry, and the non-local aspects of time/space.
Post Reply
4 posts • Page 1 of 1

According to Daniel’s Geochronology paper, the radiometric dating error grows over time. This is shown in the following data:

However, my contention is that the error growth should follow a pattern. I plotted the adjustment ratio versus years from today, and came up with the following:

These results do not form a smooth curve, suggesting that some of these data points are incorrect.

I suspect the 65 million adjustment to 75,000 is incorrect, since if it is correct, a smooth curve relationship would dictate a much larger ratio for the 4.6 billion conversion.

I also suspect the 28,000 BCE adjustment to 2105 BCE is incorrect on the basis of a non-smooth curve when considering the four closest to now data points.

If a relationship is known to make these adjustments, it seems that the entire curve could be produced quite easily to help validate or disprove the data shown, as well as to provide insight into the conversion factor for other dates.

Philip wrote: ↑
Sat Mar 31, 2018 12:39 pm
If a relationship is known to make these adjustments, it seems that the entire curve could be produced quite easily to help validate or disprove the data shown, as well as to provide insight into the conversion factor for other dates.

Conventional dating in the millions of years+ range is not based on any kind of natural consequence, but just a series of compounded error from some bad, initial assumptions (much in the way that astronomy determines stellar distances). The --daniel papers were based on correlation of events, which were connected to commonly-accepted dating for those events. I don't think one can make accurate use of conventional, geologic dating as valid, long-term data points.

Though I would suspect that the more recent info (circa 4000 BCE to now) would follow some kind of exponential pattern, as the effects of equivalent space on normal space tend to be a power series.

To get more data points, I would suggest taking a detailed look at "extinction level events (ELEs)" across history--remembering that the dates may be totally bogus, but the sequence of events would be in the proper order, as they are based on geologic strata. Relative dates between them should have approximately the same error, even though the actual time scale is probably wrong.

I had looked at some time ago, when trying to determine the error in decay dating. These ELEs seem to have specific attributes to them--they do not destroy ALL life, only specific types of life--marine at one time, land at another, etc. It would be interesting to correlate that data, as I would bet it would come down to two, different extinction event types based on the compensation for changes of magnetic ionization levels of (a) the sun and (b) the Earth.

An expansion of the Earth would greatly disrupt the large bodies of water, targeting marine life and perhaps airborne life--but have little effect on land-based creatures. A change in the sun, however, would effect land-born life and leave marine life untouched. And when the sun changes, the planets will also trigger an expansion event in compensation, so a solar event would be quickly followed by an Earth event, where a strictly Earth-event would not have a corresponding solar event. This would give you two curves--but the "Earth curve" would have some sharp points "off curve," because of solar influence triggering the event, rather than a natural, internal process.

Perhaps that 65-million year event was triggered by the sun, rather than the Earth, throwing the curve off.

The trend line for extinction events is not smooth, but looks like this (from Extinction Events): 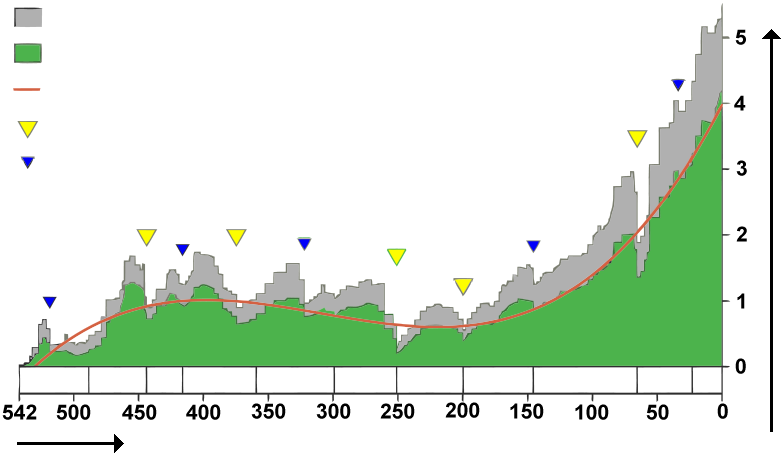 Might be a starting place to find a dating trend, as this curve is indicative of two (or more) interacting patterns--one a power function (now dominant) and the other a cyclic (wave causing dip).
Every dogma has its day...
Top

I suggest perusing Melvin A Cook's book, Prehistory and Earth Models. It is available on Amazon in very limited quantities as it was published in England because the U.S. publishers would not accept it. Dr. Cook was an original researcher in explosives and shaped charges, but his venture into paleo geology was due to his observation that certain Earth breakage fractures (as with the Grand Canyon) had the same pattern as high energy metallic fractures. In his book, he addresses geological timing, and the reasons that the current accepted thinking is so wrong.
Graybeard
Top

On order, along with the sequel. Looking forward to reading it.
Every dogma has its day...
Top
Post Reply
4 posts • Page 1 of 1