Discussion of the astronomical and cosmological aspects of a universe of motion.
Post Reply
6 posts • Page 1 of 1

As usual, something does not "add up" here. The solar wind, alone, impacts the magnetosphere at 400 km/s. When you include ejected matter from a solar flare... I just do not see how this tiny of a magnetic field can stop it. I've looked at the equations, but they just appear to be fudging the parameters to make the system work--not real measurements. (Same problem with astronomical distance errors, where they just "scale up" the objects to fit the equations.)

If we look at an old television tube, it is basically an electron gun firing "charged particles" that are deflected by a magnetic field, just like the van Allen belts are doing with the charged particles of the sun. An electron is emitted around the 10 kV range, a tiny fraction of the energy of one from a solar flare. The magnetic field strength needed to deflect this is around 3 mT--272 times larger than the 11 nT field strength of the magnetosphere. Common sense says that this cannot work, as described, so something else is going on here.

I did some research on the Earth's magnetic field (field strength in nT):
.

.
The Antarctic pole makes sense (the north magnetic pole), because the location of the pole is where the field intensity is about the strongest. But the Arctic pole makes no sense--it is located at a point out in the middle of nowhere. One would expect to see the contour lines surrounding it, as it does in the south, not in the middle of two other high-intensity fields to the east and west.

When I look at these maps, I see FOUR poles, not "two ends of a bar magnet." They get the dipole model from a "horizontal field intensity" system, which is responsible for how a compass points--the vertical component is omitted. This gives a more classic distribution, with one exception off the western side of Africa--the magnitude component is omitted:
.

.
Edmund Halley had done quite a bit of research on the Earth's magnetic field, concluding that there were four "shells" needed to explain this structure, which led to his "hollow Earth" model of concentric shells, rotating at different speeds. Of course, this is now ignored--yet, they still use this structure in disguise (much like the aether)... in this case, their "shells" are the upper and lower mantle, and inner and outer core. These shells are quite likely to exist--not as rocky shells, but as speed ranges, a concept unique to the Reciprocal System, documented in the Part V --daniel paper.

What I suspect is going on, is that the Earth's magnetosphere is actually the static, 2D rotational form of measurement, that we have no instrumentality to measure--until it gets clobbered by charged particles. The charge of the particles will impose a charge on the magnetic rotation, creating a 2D rotational vibration--something we CAN measure as the "bow shock" and magnetopause. And this imposed charge is creating a magnetic response that is millions of times more intense than the 11 nT field they think is out there... enough to deflect all these energetic particles easily.

Essentially, it works like a Star Trek deflector shield, or the city shield of Stargate Atlantis. An energy weapon directed against it (beams of charged particles), hits the rotational field and charges it up, causing the weapon charge to be distributed across the field, dissipating it:
.

.
The Wraith weapons hitting the shield (which should be invisible) cause the charge reaction, creating magnetic charge to dissipate it and the photon vibration of emitted light (aurora). Quite accurate! (This is probably how the force shield designed by Tesla worked.)
Every dogma has its day...
Top

The Earth's Magnetic Field is changing

Or rather the charge on the magnetic field. Regardless, a change is now clearly evident.
Infinite Rider on the Big Dogma
Top

Re: The Earth's Magnetic Field is changing

Or rather the charge on the magnetic field. Regardless, a change is now clearly evident.

article wrote:Earth’s magnetic pole is on the move, fast. And we don’t know why

Earth’s magnetic field is what allows us to exist. It deflects harmful radiation. It keeps our water and atmosphere in place. But now it’s acting up — and nobody knows why.

I wrote a paper on it back in 1996, based on Prof. KVK Nehru's sunspot research: At the Earth's Core: The Geophysics of Planetary Evolution

But at the rate it is moving... get ready for a magnetic pole flip soon!
Every dogma has its day...
Top


bperet wrote: ↑
Mon Jul 02, 2018 11:09 am
The Antarctic pole makes sense (the north magnetic pole), because the location of the pole is where the field intensity is about the strongest. But the Arctic pole makes no sense--it is located at a point out in the middle of nowhere. One would expect to see the contour lines surrounding it, as it does in the south, not in the middle of two other high-intensity fields to the east and west.

When I look at these maps, I see FOUR poles, not "two ends of a bar magnet." They get the dipole model from a "horizontal field intensity" system, which is responsible for how a compass points--the vertical component is omitted. This gives a more classic distribution, with one exception off the western side of Africa--the magnitude component is omitted:


On average the planet's magnetic field has lost almost 10% of its strength over the last two centuries, but there is a large localised region of weakness stretching from Africa to South America.

Known as the South Atlantic Anomaly, the field strength in this area has rapidly shrunk over the past 50 years just as the area itself has grown and moved westward.

The big question is - reducing and splitting naturally or because the Ascension island UFO base is around where this South Atlantic anomaly is?


"Over the past five years, a second centre of minimum intensity has emerged southwest of Africa—indicating that the South Atlantic Anomaly could split up into two separate cells."

Since they will never read Bruce's incredible paper i'll give them a clue, the Earth's core is NOT a big ball of magma!

What is really interesting is to look back to 2014 when the anomaly was east of Africa, check out the weakness in the field where Ascension island is: 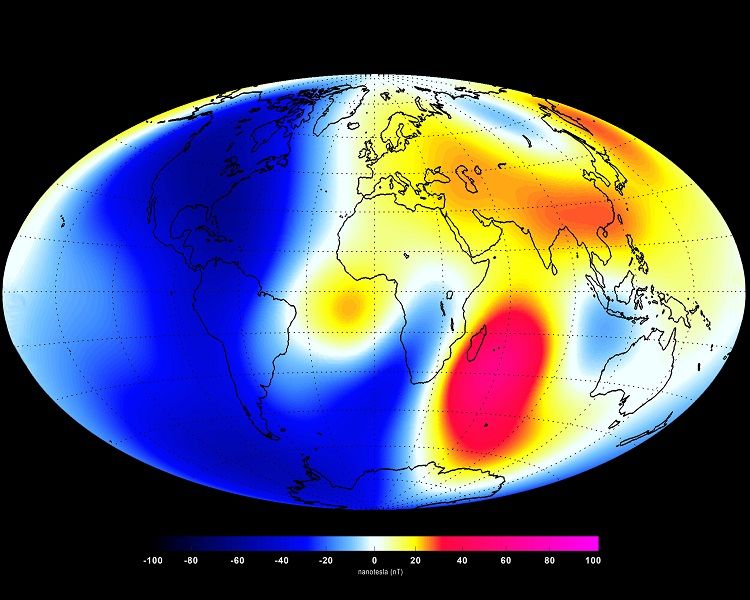 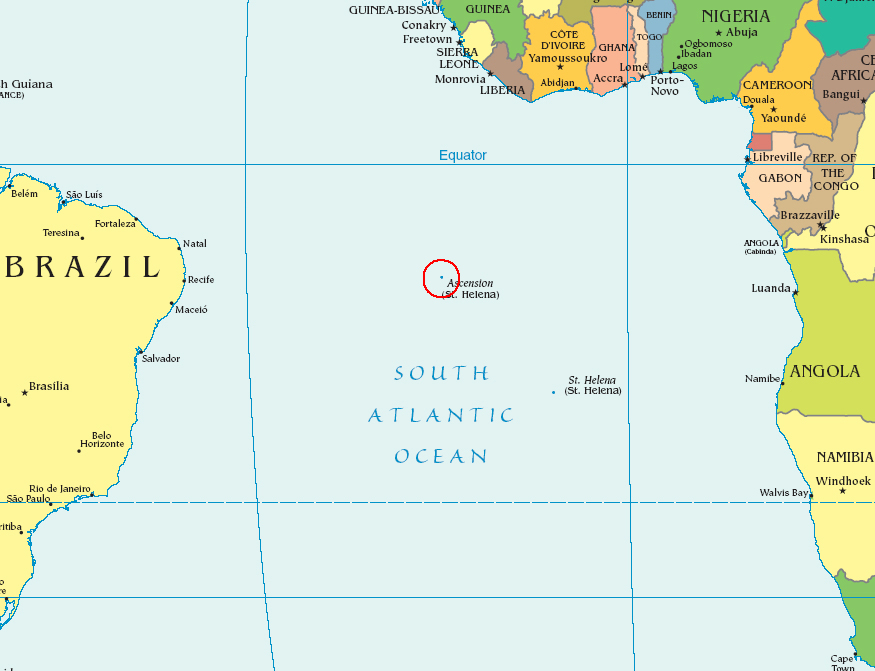 It could be that the split is due to the natural anomaly moving westwards over the man-made UFO anomaly of Ascension Island.

The only thing is that Ascension Island doesn't really match up for this new split: 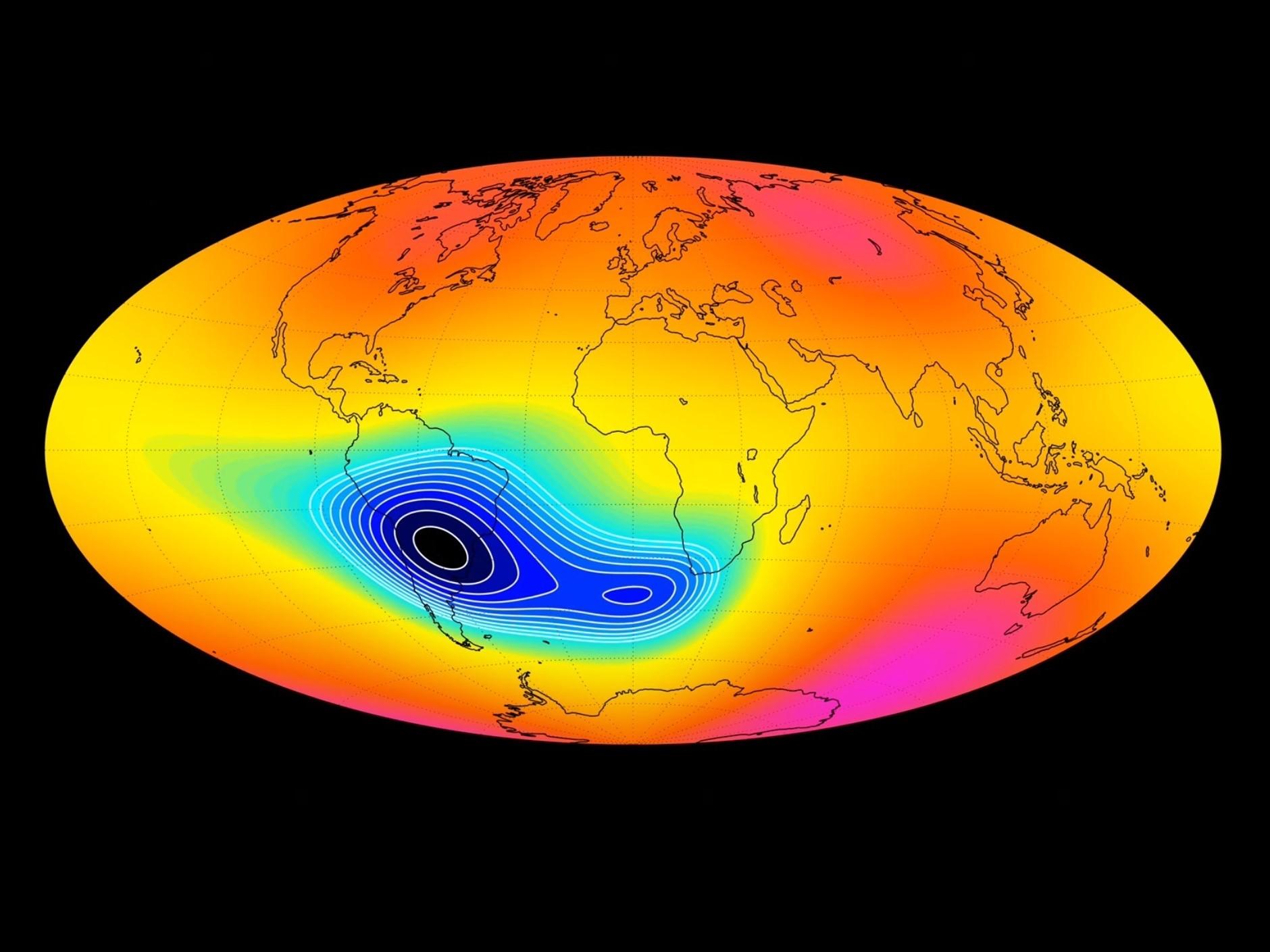 It doesn't look like this animation screenshot provides the full magnetic anomaly picture though. Alternatives that match the smaller anomaly better geographically could be Tristan da Cunha or Saint Helena, both owned by Britain and the Queen, you can tell the parasitical satanic "elite" are active on there - https://en.wikipedia.org/wiki/Saint_Hel ... se_scandal.

What is interesting about the image above is that the 2014 source of the magnetic anomaly is exactly where the British Indian Ocean Territory (BIOT) is, originally known as the Chagos Islands before Britain threw all the native inhabitants off to other islands then leased it to the USA to build...


In 1971, the United Kingdom and the United States signed a treaty, leasing the island of Diego Garcia to the US military for the purposes of building a large air and naval base on the island. The deal was important to the UK government, as the United States granted it a substantial discount on the purchase of Polaris nuclear missiles in return for the use of the islands as a base.[17] The strategic location of the island was also significant at the centre of the Indian Ocean, and to counter any Soviet threat in the region.
https://en.wikipedia.org/wiki/British_I ... _Territory

Surely the reduction in magnetic field is also related to the solar minimum? If the sun isn't active then earth can take a break and lower deflector shields. What worries me is the "elite" and military fiddling with things they shouldn't be, magnetic or otherwise.
Top


The Air Force isn’t the only organization on Ascension. The Royal Air Force is stationed on the island as well. Both the Air Force and the RAF work together on joint airfield operations.


“Close to the equator in the Atlantic Ocean, we get a view of the sky that a lot of places don’t get,” said Bouffard. “We can keep an eye on orbits that you can’t see in other parts of the world.”

Being near the equator is good for launch and orbit raising purposes but does nothing for observation purposes. Most of the more secretive birds fly highly Polar orbits which have them over the poles. A satellite in Polar orbit passes over the equator at a different longitude for each orbital revolution. The view to any satellite in Polar orbit would be very low on the horizon from near the equator. This is cover or the reporter is personally unaware of the lack of veracity of this statement.
Infinite Rider on the Big Dogma
Top
Post Reply
6 posts • Page 1 of 1